There's Only So Much TIME For It All 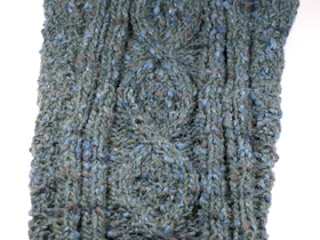 I think I like it.  Naturally, the pattern from which I started turns out to be little more than a vague starting point.  The yarn for which it was written must be something smooth and round and shiny, or otherwise the designer is just a boot camp instructor wannabe, because everything is 1x1 crossed stitches, even IN THE MIDDLE OF THE CABLES.  Yes, I meant to shout.  Not only is this overkill, especially on highly textured yarn like mine (into which the stupid things disappear), but it's also extraordinarily irksome, guaranteeing that I'd never ever EVER, come hell or high water, finish it.  Ask me how far I got with the Bavarian socks in the first Nancy Bush book (like three rows, if that).
The sleeve is a little more tapered than has been fashionable the past few years, but if there's one thing I know, it's that huge bell sleeves Will Not Last Forever.  Yes kids, a fashion prediction.  I know I'm not wrong here.
The cardigan in the pattern has set-in sleeves and very deep armholes, which translate into rather wide sleeve tops.  Given that I have not yet reached the Arms With Wings stage (I've been working my biceps, triceps and deltoids, which are actually painful today - and it's smug virtuousness that keeps me doing it) I have little need for that much ease, and rather than recalculate the sleeve cap, I'm going to go raglan.  I'm also toying with the idea of making an asymmetric zippered closure and something collar-ish, rather than a buttoned straight-down-the-centre vee-neck opening, but I don't have to decide just yet, do I?
While there are times when I really couldn't be bothered, and just want to knit that damn thing in stocking stitch, I would say that this stitch pattern is just the right amount of interesting.  It has (in case the picture is bad, or your monitor is broken, slightly) a central cable on a reverse stocking stitch background, flanked by two pairs of ribbed columns, and the rest is double moss stitch, as is the centre of the cable, when it opens up.  And because I really don't know which language I'm speaking any more (I should just say here that I'm trilingual in knitting needles: I know Imperial, metric and American sizes, except for sock needles, in which I'm only bilingual, since I didn't start knitting socks or using such small needles until I came to the US), but what I know as double moss stitch is alternating knit and purl stitches, stacked two high, as opposed to [single] moss stitch, which is just knit and purl stitches alternated by row and by column.
And now for the Yarn Pron: 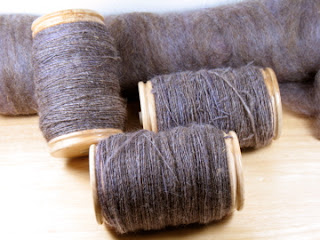 I'm not terribly clever with photography, and purples quite frankly stump me.  This is a sort of smokey purple which started off its life as a charcoal-brown Border Leicester fleece mixed with extremely bright royal purple kid mohair.  I finished two bobbins at our monthly eat fest, uh, spinner's get together, and have almost another bobbin complete too.
I'm going to have lots of this: two bobbins per bump, and I'm sure I have at least six more bumps.  Maybe eight.  (I had to count.  I have nine).  This will end up as a three-ply, probably in the worsted weight area - I'm making an effort to spin a bit heavier, as I want to use this for a coat or jacket of sorts, as it's just not yummy enough for next-to-the-skin wear.  Not bad, but not luscious.   This goes a lot faster than fingering weight three-ply cashmere, even with the Stupidly Fast whorl on my Schacht.
I've finally found my mojo for Amy's necklace, and if not for the class I'm teaching tomorrow, 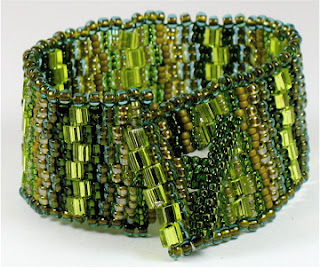 it would be finished, but it's close, really close. 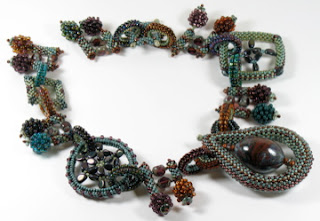 wow. your beading is not pron, it's the "other" one. I spun some sludge the other day and thought of you. Also yesterday I spun some of "our batts" and plyed them with the sludgy stuff. O.M.G. it came out looking like gasoline(sp?) on the road after a rain storm. It was so fun and beautiful I had to go have a smoke after. I really want to do projects with you ??? If you do that sort of thing??? May next year for the soar gallery ??? I have some ideas of half and half peices, half beading, half fiber.??? Think about it. I'm easy to work with. Happy thanksgiving. love Dennyx0x0x0x

Yesterday I spun the last of "our" batts too! I'll post a picture of all of them once they're all washed. I've never done a project with someone, but that doesn't necessarily mean I won't - email me off the blog and we can talk about it. (One of your less-Luddite-like compatriots will be able to help with the email thing if you're confused...)