Excuse Me While I Take This Detour

I'm not sure if I'm more pleased when I've sketched and planned to the hilt and the execution works out perfectly, or when I sit down to make something, get an idea about something else entirely, promise myself that I'll just try it out briefly and next thing I know it's almost 10pm and I have a new favourite Thing. 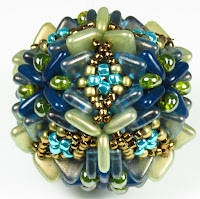 You can't see (because I photographed its good side) but it took a couple of repeats of the motif to get it right. I cut up a few false starts where thread was showing, so I added more beads, different sizes of beads and they weren't right either and honestly on the back of this thing there are a couple of extra size 15s that are a Bad Idea.

Oh. One of them can be seen in this second picture. Whoops. 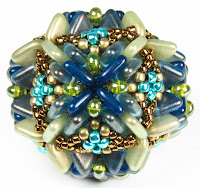 This is a riff on a motif that was part of a bracelet but which I turned out to not like very much after making it up, but with a little bit of a change it makes a perfect beaded bead.

It's pretty sturdy and I think it might even be firm enough for someone who doesn't stitch as tightly as I do.

It's relatively lightweight as it's hollow and doesn't have rivolis or fire-polished beads or any other large, bulky beads, just seed beads and two-hole triangles. 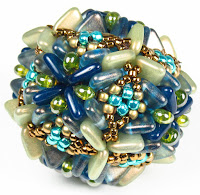 It's also quite big, almost two inches across and because it has sticky-out bits (the regions with two-hole triangles) and indented bits (the areas with round seed beads), it's a perfect fidget piece as your fingers fit so delightfully in the valleys as they glide over the hillocks in search of the next valley.

I'm also charmed by the fact that I've used triangular beads to make a beaded bead which is a cube even though it doesn't look like one. Much.

So now my challenge (which I actually don't care whether or not I meet so I suppose it's silly to call it "my challenge" as that implies I'm all fired up which I may be in terms of making things but the notion of a challenge when it comes to things I do for my own pleasure seems quite frankly slightly ridiculous) is for each day of this four-day long weekend to be as productive.