On the plus side, my basement is as finished as it's going to get, but on the other hand it's poorly done. I'm obviously weak and spineless, because I was so desperate to have my studio back that I gave up on all but the most egregious lapses in quality because it's been almost three months and I basically couldn't stand it any more.

Hey Contractors! Do a really crappy job extremely slowly and even when you redo your terrible work, make sure it takes forever to do it almost as badly again and eventually the poor homeowner will just say ok, what the hell, it's fine.

I'm all moved in and mostly (re)organised with some new shelves and containers and the like so that makes me happy.

Right now I'm gazing at the staircase where he chipped off about a dozen spots of paint getting the old carpet off. Par for the course that he either didn't notice or didn't care but more to the point didn't fix it. Guess I have some painting in my future but I have to keep reminding myself that I do have my space back again.

Remember that pendant from last week? I reworked it a bit and now I'm much happier with it, though  it's a bit of a challenge to stitch as it depends extremely on the type (the size and proportion to be exact) of the beads used. I had to cut up the one I started with Toho Permanent Finish beads as they were utterly unworkable. 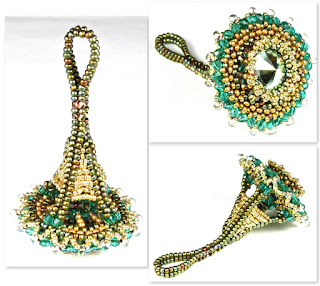 Then that other thing that I said was an earring? See? 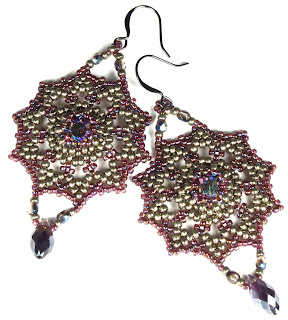 I made its mate and added ear wires so you can see I wasn't out of my mind. John thinks it would be very nice as the centre of a crocheted doily and he may well be right but (a) I prefer not to crochet and (b) no way no how will I ever crochet a doily.

When I teach at my local bead shop I'm obliged to use only materials which they carry, which is fair enough as classes are essentially a mechanism to get people to buy beads, right? But I thought I could do better if I used more rivoli sizes in a design I'm teaching sometime between October and January, so I found rivolis in 12mm, 14mm and 18mm and yes, I'm pleased to say that it's much better this way. 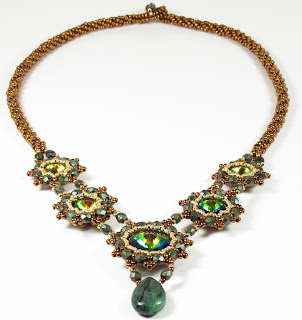 At least I think so.

In the Did She Lose Her Mind department, I have to tell you that I just made marshmallow fluff using honey instead of corn syrup and I'm here to report that it's pretty delicious although obviously overwhelmingly sweet. I had these leftover egg whites you see and I'm making a cake to take to work tomorrow and the poor birthday boy can't eat dairy so I thought a S'Mores cake (see Depression Cake or Whacky Cake for a dairy-free and coincidentally egg-free cake which is actually rather good) would be fun.

I made a chocolate ganache with bittersweet chocolate and coconut cream, I have the honey fluff which I'll pop under the broiler tomorrow, and I'm debating whether I feel like crushing some graham crackers and toasting them to sprinkle over the top. (I'm tending towards "not really").

I think it'll be just fine as is.

Let me share the saga of my lemon of a fridge.

The old one was a year younger than my daughter (in its early twenties) when it started leaking towards the end of last year, so I bought a new one which started leaking the minute I tried to use the ice maker. Blah blah blah FIVE SERVICE VISITS LATER it's still leaking, albeit from a different place (not from inside the freezer) and I wish I could get my money back and buy another brand as this Whirlpool is a disaster and the warrantee expires in November and at this point I'm not even slightly confident that it'll be fixed by then because so far, each service technician has decided that the problem is something else entirely than what the previous technician thought and so far, none has been completely right although in all fairness the last one did fix the original leak in which the back and floor of the freezer would fill with ice that would slowly melt and puddle on my newish kitchen floor, but has left me with a new leak and if I sound a bit incoherent you must agree that there's a good reason for that.

I'm hoping this week is better.