Too Bizy to Rite, No Brane Sells Left

So the walls were covered in scotch tape; either its nasty sticky dirty residue or the stuff itself, invisibly melded with the wall, crumbling instead of peeling off.

I bought some so-called adhesive remover that turned out to be oily, and I didn't need to be dealing with getting that off afterwards in order to have the paint adhere, so I bought something else which was pretty good at removing residue, but which still required the use of a razor blade to get the tape off. And then required washing - and then rinsing - the walls with something else toxic in order to get the residue of that stuff off.

This business takes time and I think I've inhaled so many neurotoxins that all I could smell today (and I know it was inside my own nose only) was sulphur dioxide which I'm pretty certain - I asked - no one else could smell.

So when I took the oily stuff back to Lowe's (they said I could if it didn't work), the woman at the Returns register told me I should have just used a blow drier, and next time I should call her.

Good to know, but too little too late because my son's walls are in far better shape.

The inter-toobs failed me on this one because it didn't tell me about that solution but instead steered me towards teratogenic substances. Luckily I'm no longer in the pregnancy business.

I did start the weekend off well though, by going to see Harlem Dance Theatre who were absolutely wonderful, except in the one number that ordinarily I'd have thought I'd have loved the best (Pas de Deux, music by Tchaikowsky, choreography by Balanchine)  except that the man was sloppy, the woman insipid, and he practically DROPPED her. If it had happened centre stage instead of almost in the wings, the audience would have gasped. I've never seen that happen before and while it was thrilling in a way, I'd rather not see that again ever.

The rest of the show was exceedingly good though. 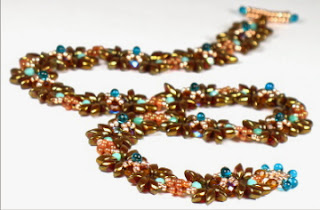 And then I worked on class samples.

The beaded bead I was working on earlier in the week? Yeah turns out the bead store for all intents and purposes has no more of the rivoli beads (except one pink strand) but they do have these funky asymmetric beads that they call wonky beads that really work charmingly well. 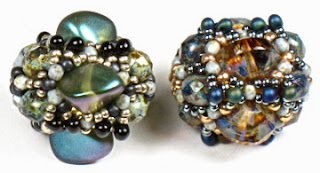 And then I needed to see if this pendant could realistically fit into a two-hour class and even though they won't finish it (what else is new) in two hours, they will be able to do all the different things necessary for success, so I think it's doable.

And I have another sample. 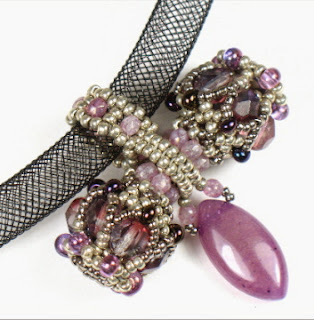 And then tomorrow's class which promises to be well-attended also needed some work on the instructions. That bled into today.

Oh and yeah, my baby stopped by for brunch on Sunday on his way back to school after visiting a friend and because the place we decided to go was really busy, everything took longer so we had more time which is certainly always welcome.

I did at least get the entire room primed.

My plan is to paint walls, ceiling and doors all the same colour (beige, just pale beige) because they are all nasty and I just couldn't be bothered with the masking tape for all the colours. The ceiling though, that won't be fun. I can tell I'll need eyewear and probably a shower cap would not be a bad idea. I know I'm going to enjoy the outfit which will also need to include work gloves as the priming left me with a respectable blister.

I don't hate painting even though it takes longer than I tend to think it ought, but this time I find myself less in the mood, but the plan is in motion so I must go forward.