Every time I think I'm fabulously well-prepeared and could really spend the day before leaving with my feet up, it turns out I was delusional.

I knew exactly which photos I was going to take of today's sewing project, and then it was mostly complete with some handwork remaining to do in the car tomorrow, so I guess I blew it.

Another picture of stacks of little boxes filled with something creamy isn't that interesting, so all that remains is the latest finished kumihimo necklace. 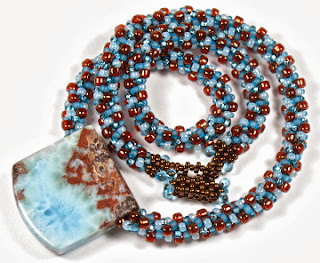 You can't really see all that well how the clasp is attached, but so far this is to me the most satisfactory.

So my big project today was to improve this bag I have. It's either a huge handbag or a slightly smaller tote, but either way it's this brightly-coloured floppy leather concoction in which everything gets lost. It doesn't stand on its own but collapses in a puddle and things flop around and even though everyone who sees it just LOVES it, it's not as functional as it could be, so I did something about it.

First I made a framework of plastic canvas which I whip-stitched together. The side gussets can fold slightly so that if the bag is zipped closed the corners of the plastic canvas interior box won't poke the leather (it's fairly soft).

Then I sewed a lining with roomy pockets all the way around, about half the height of the lining and pouchy with elastic along the opening so that you can get more than a card into a pocket.

Last (so far - this is temporary) I, um, used safety pins to attach it to the lining that the bag already has, just below the zipper. This makes it functional (ish) and holds the new lining in place so that in the car on the way to SOAR (yeah!) I can sew it in place.

I've been wearing wrist braces while sleeping for the past two or three weeks, and during much of the day, especially if I'm doing anything that aggravates the carpal tunnel. I've seen some improvement, but my hands are nowhere near back to normal, and I've lost quite a bit of grip strength, just in the past couple of weeks. Opening jars is problematic. I haven't knitted since early September, and I'm a little afraid to try.

I have packed two sock projects, and a summer cardigan which is close to complete in the hope that it won't hurt.

I've also packed a boatload of kumihimo projects in the fear that it will.

Either way, this promises to be a bittersweet week: the last SOAR, my nineteenth. I'll be with friends, and I'll eat and drink too much and laugh more often and be wildly inspired.
Posted by Charlene at 10/19/2013 10:37:00 PM