I just can't figure out how to photograph purple so that the colour is true in the picture. 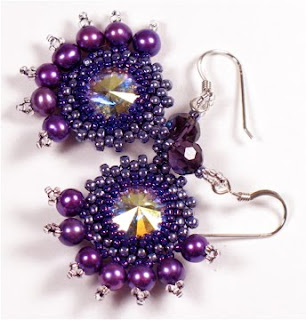 I messed with the different white balance settings and exposure and then slid sliders back and forth to capture the deep royal purple beads surrounding the rivoli and the plummy-magenta pearls, but this is the best I can get. The faceted beads are fairly true though.
So a few months ago I had a moment or two of confusion as to whether I was using 12mm or 14mm rivolis, mistakenly settled on 12mm and ordered a dozen for some bright idea or another. Naturally I needed 14mm.
As it turns out, if I use mostly size 15 seed beads (with one round of 11s) to capture the rivoli, it works out pretty well. And since they're crystal aurora borealis (sort of rainbow iridescent), they'll look good with surrounds of other colours too.
I hope my camera is friendlier next time.
Posted by Charlene at 10/08/2009 10:50:00 PM

I think the pictures turned out very well! I like the earrings! My address is......

Well thanks - but it doesn't match the real thing. All very well for showing off :> but if I wanted to sell it, it ought to be truer to reality! Otherwise there are lawsuits for truth in advertising, blah blah blah..

Or at best a surprised customer!