And Then There Was More

Food, that is. Isn't that what Thanksgiving is for? Excess? As practise for the so-called "Holiday Season" which really means Christmas, but don't get me started on that rant just yet. Let me work up to it.

Luckily Julia came to visit a couple of days, and we knitted to the conversation. She finished a baby sweater and wove in the ends of her fair isle hat while I made hexagons until I was replete with hexagons. 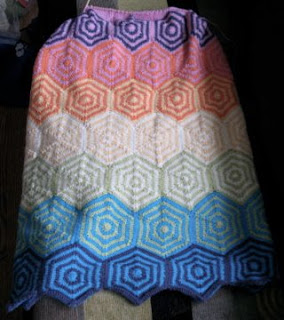 This was good news, because it meant that I could start filling in the spaces between the hexagons so as to form a waistband. 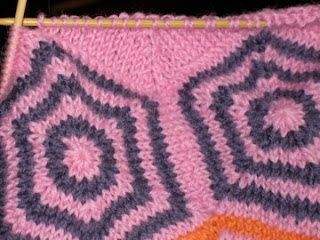 This process is mercifully quicker than hexagons; I did two while thinking about getting up to work out, it was that quick.

My plan is to use double-knitting with a sewn bind-off to form a pair of casings for elastic which will ensure that my skirt does not fall down, which would be inconvenient, and possibly (probably) embarrassing. I don't think it needs a whole lot of taking-in at the waist (well, below the waist actually) so there will be none of that ghastly extra bulk born of gathering. With a bit of luck.

Then while I knit the other eight hemi-hexes which are more like hemi-demi-hexes since they're smaller than a whole half of a hexagon, I can plan my next project, an a-lined jacket/coat/cardigan in panels with cables loosely based on one Luisa Harding and about three Jean Moss patterns, but ultimately not all that much like any of them, except in their a-line-ness.