I had a relatively productive day. 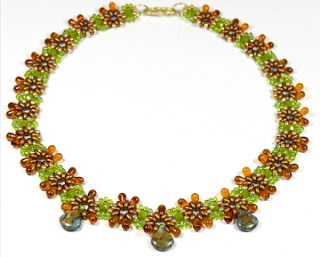 It's less than two and a half months until Bead & Button and I haven't completed all the preparations and it's beginning to make me anxious, so I settled down to it.

Along the way I needed a break so I whipped up a pendant with matching earrings which it turns out do not photograph well against a white background. 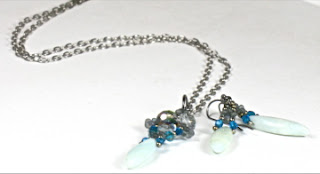 I now have all my Dolce samples done, though the kits aren't yet packed. 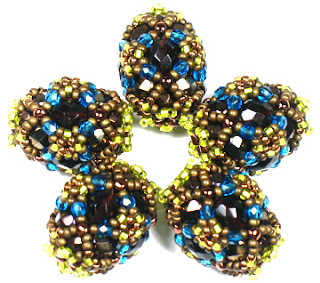 I also have three out of four Trivoli samples done. 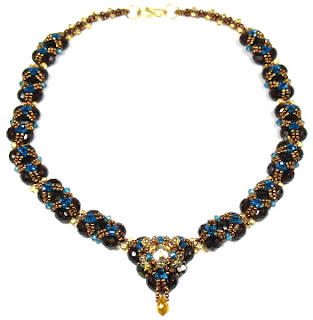 Grey works much better as a background. 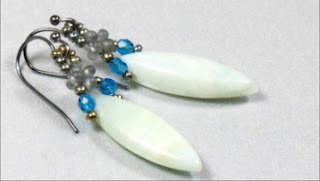 I'm completely caught up with Downton Abbey, which means that I no longer have to cover my ears and sing (badly and loudly; the former is out of my control but the latter id deliberate) when people start talking about it.

I wanted bling and hooplah and drama and glitz, but I couldn't get the last of the rhinestones to stay in, and the ones that were in didn't look as divine as I'd envisioned, so I started again, and I actually think I like this one better. 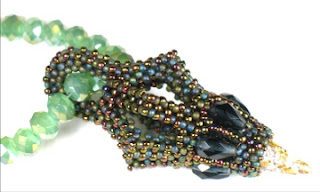 I like the airiness and the architectural look and swooping lines, and while it may be possible to dress it up with picots and fringes and whatnot, I actually think it stands (or hangs) on its own.

In between the knitting and the prep for Tuesday's class, I worked on this. 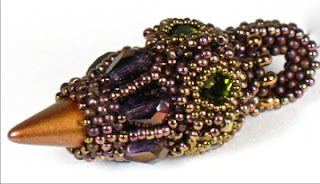 I had to cut the whole thing up once or twice, and I shredded a boatload of thread before I was able to get the crystals properly seated. It's kinda crazy fiddly and unless I can figure out a way to make it a reasonable undertaking (and that very much includes being able to explain how to connect all the bits), it won't be teachable as is.

Perhaps without the crystals.

Perhaps if I used beads instead of chatons.

One thing is certain though: I'll have to finish it first.

I've been knitting more than I've been beading recently when I ought to be picking up speed. Bead & Button is less than three months away and there are people signed up for my classes, so there are kits to pack and samples to sew and I'd better not get behind. 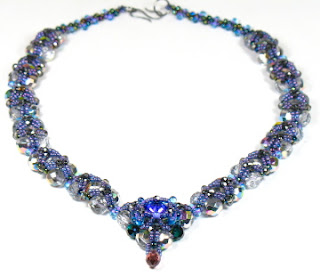 Sometimes you need a second pair of hands. Paws. Eyes.

It helps especially when your helper has a clue about wheel mechanics, otherwise it's just funny. 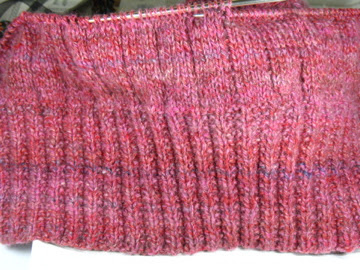 Usually I blog at the end of the day when I think I won't get anything more done, except yesterday I just carried on and did more.

You know how I always talk about knitting but then never post pictures so I might as well be lying? 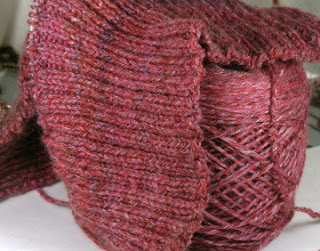 See, I'm not. I'm loving the way this handspun is knitting up. Each ply is from a different happily coordinating handpaint, the perfect thing to do with the small lots I always end up buying. 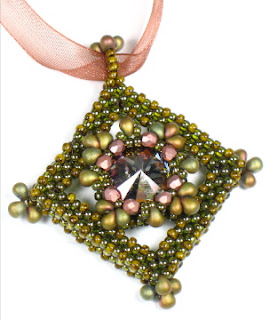 I'd made a pendant similar to this a couple of weeks ago, but it was sort of complicated to join the intter part to the outer frame. I'm not sure why I was making it so complicated, because there's an incredibly easy way to do the join as it turns out. Now I'm thinking more, more, more.
Posted by Charlene at 3/04/2013 10:03:00 PM 1 comment:

The Best Thing Ever is making new and successful things (as opposed to new and unsuccessful things which are ultimately just a pile of beads and a pile of squiggly short bits of thread), but among the next tier of Pretty Decent Things is making things again and remembering to photograph the steps, and getting a lot done.

Spike pendant, twice, plus photographs and part of the instructions. 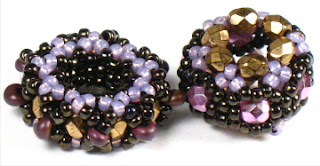 Two sliders, once and twice respectively, photographs, one set of instructions. 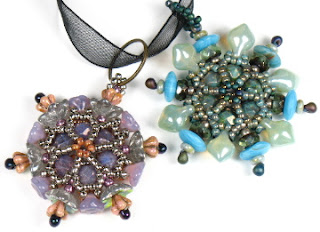 Burst pendant variations, with photographs, no instructions (I was getting a little weary). 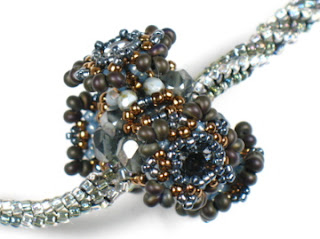 Petit Chou-Fleur (thanks, Amy. I'll see cauliflower with every variation) with photos.

I spent all day yesterday working on a New Thing which turned out to be a Bad Thing and ultimately a Failed Thing sitting next to my task light, taunting me with its awfulness.

Last week I suddenly and quickly finished a cardigan I'd started what seems like five years ago but was in fact November or so. It's one of these things which you can knit almost entirely on short doublepointed needles, essentially consisting of strips of knitted joined one to the last, and I guess the last few strips were the shortest and so while it seemed as if I ought to have months of knitting ahead of me, suddenly all I needed to do were the button bands.

I had a panicky hour or so when I couldn't find Denny's buttons which turned out to have been stashed very carefully and thoughtfully in the same bag as the yarns that I was using for the sweater (I didn't plan which colour went where; I picked the next according to the way I felt at the time that a choice had to be made. I think it worked out OK).

It fits excellently and I've worn it twice already.

No, before you ask, I don't generally take four months to knit a cardigan. You may recall (or not, since pictures were practically non-existant) that these four months also contained two pairs of socks and three pairs of mittens which yes I know isn't a massive amount, but it interrupts the, um, flow. 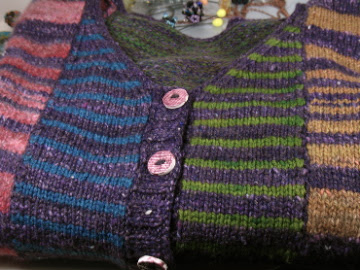 In more exciting news (depending on your point of view; this is mine) I was interviewed for the Bead-Perles blog; the interview was published on Wednesday.