I'm officially in Panic Mode for Bead and Button.

Honestly, it's not that I seriously believe I'll show up to class unprepared - I won't: all my instructions are done and all kits are semi-packed (all the necessary beads for all the kits for all the classes are measured and bagged, however not all the kits are assembled and some of the individual baggies may not yet have identifying stickers on them) - however it always seems as though there are a million things to do and only two and a half hours in which to do them, what with the competing demands of the day job and family.

Even though the bulk of my nervous energy has been in service to Bead and Button preparations, you just can't turn Being Compelled to Make New Stuff off completely, so I spent half an hour on this cute little two-sided chain. It's not enough to have in a class by itself, but it's a nice component of a[n unplanned as yet] project, and it's so simple that it's begging for variants.

There are some kit samples that I can stitch up relatively quickly, but this isn't one of them. There are many MANY hours of effort in this one - and I have two more colour-ways to go. It's possible I won't complete them both, but as it's for a kit, not a class, and as I'll have a decent amount of free time before Meet the Teachers, I can live with that possibility. 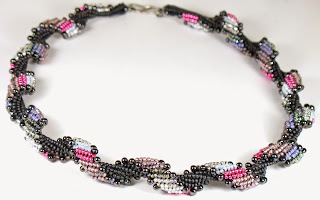 And then I was so relieved to have finished that colour-way (and packed all its kits) that I played some more.

I saw some sort of beaded beads on a (possibly Czech or Polish or some other Eastern European language that I don't recognise)  that used two-hole lentils in a vaguely dodecahedral configuration and I thought it seemed like a fun idea. I think it was with bicone crystals and seed beads; I don't remember, but I started playing anyway.

The first one on the left above only came together after a few tries, and even then, not so much. I messed up the thread path so the tension is uneven so the shape is uneven too, and it seemed as though the seed beads were too small, so I tried again with Super Duos and bigger beads and that was better. Then it struck me that the two-hole triangles might behave (they don't always; the sometimes want to list) so I tried that and changed the seed beads again. I'm happiest with the final result but there might be an embellishment I could try...

After Bead and Button.