I've said it before and I'll say it again: I have the hardest time coming up with names for things I make.

Some are purely descriptive: Cuboctahedral Bouquet (it's a cuboctahedron with floral thingies), Rondelle Spacers (do I need to explain that one?), but mostly not so much.

If you're going with two- or three-word descriptive phrases, it doesn't take long until you start reusing names, or wanting to. If you use too many words and the names are too long, they also won't fit into the template at the bead store at which I do the bulk of my teaching so there's incentive to find a small collection of letters that can be arranged into a name.

Once I asked for suggestions on an email list, and gave the pattern as a prize for the winner, which is where La Trenza di Sirena came from (a necklace with has a plaited bit) and that gave me the idea that is most often the genesis of the names of the pieces I'm going to teach.

I come up with an English word that captures something about it, and then go to a translation site where I plug in the word and choose the nicest-sounding foreign word. Sometimes I change the spelling so that my American students will pronounce it closer to the way I hear it in my head, though honestly that doesn't always work.

But at least I end up with a name. 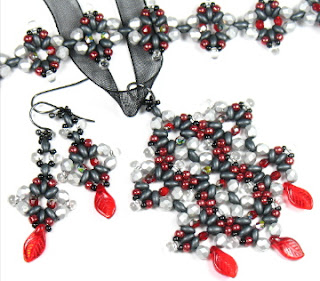 For this one, however, I can't even find a starting-point.

It's not that I don't like it, I do! It's a fun little motif that can be combined in different ways (there's another variation I need to make) and it has a good variety of beads so there's the possibility for lots of colour and texture experimentation and variation but for the life of me, I'm without a single word to describe it.

Motif? Seriously? That's all I can do?

Seriously yields: baie (Afrikaans, but that means "very"), сериозно (Bulgarian, but my regular keyboard doesn't have those characters and I have no idea how to pronounce it), seriamente (Portuguese), vážně (Czech, I have an idea of how to pronounce it, but an English transliteration is a little difficult because we don't have those sounds), ernsthaft (German, it sounds too dry and earnest), alvorligt (Danish, too hard to say), (στα) σοβαρά (Greek, same problem as Bulgarian), en serio (Spanish, meh), vakavasti (Finnish, now I like that!), secara serius (Indonesian. I like the first word), and lots more like 嚴重地，認真地，嚴肅地 (Chinese. Yeah, that won't work either).

I think I like Secara, whatever that means. In my head it's s'KAra.

It reminds me of a Goddess shape....