I've never owned a computer that was not a Mac.

I've never had trouble with a computer, except once that eMac died and they said it was cheaper to replace it so I did. My daughter was distraught at the loss of 30Gb of music, so my colleague Matthias carefully and painfully extracted the hard drive.

The stroke of midnight was uneventful.

The following morning was like any other. I drank coffee, read email, that sort of thing.

That evening my laptop forgot it had an Airport card. Like that man who woke up with someone else's arm attached to him; unrecognizable. Sadly, my laptop isn't much one for deductive reasoning, and no amount of cajoling could get it to recognize its own Airport card.

I still have the replacement eMac (an iMac) so I went surfing for solutions.

Then I saw something that said to remove some file that was a remnant from a previous operating system, and I checked, and nothing had changed or been touched in two years, so I deleted the file and tried to restart.

No problem, I thought: I have Time Machine and it backs up ALL THE TIME. I can do this.

Time Machine lies. It said it was backed up through Tuesday morning, but it has nothing newer than November 28th.

More than a month of stuff is missing.

A pox on Time Machine. I suppose it's better than losing everything, though in truth I could have started it from a system disk (if only I had one, what's that about) and reinstalled that stupid file from the Trash.

The other problem? Time Machine (my stupid choice) didn't back up Applications, so I had the OS, but no Safari, no System Updater, no iPhoto, no iTunes, nothing.

Luckily my son with his newer-than-mine laptop is in town, so yay File Sharing, I copied his Applications folder to mine and I'm set.

Except for the missing stuff.

I'm not sure what the lesson is. Better research next time? Don't freaking delete anything just because some random strangers cheerfully suggest it will help you? Bite the bullet and pay for those so-called Geniuses to fix it?

Meanwhile, earrings for a friend. They're a surprise (if she doesn't read this). 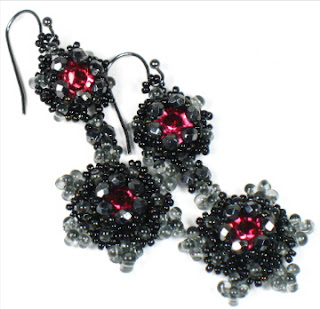 Version 2 of the spike pendant with the back window. 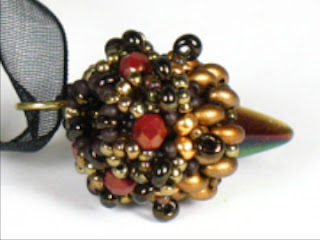 See the floral shape deep inside? 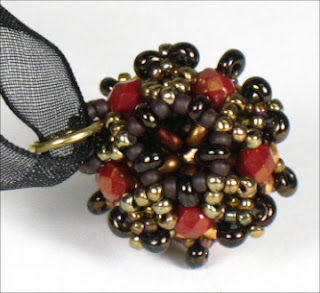 In December I completed the instructions for at least two classes that have not even been submitted yet (so they'd be sometime after May).

Worked out colour-ways for my Bead and Button classes.

Mostly gone. Some are on the iPad, which I synced about a week ago.

I'll give myself a full week to get over the loss, and then I'll move on.

Oh no!! So sorry. I hate it when technology bites us in the ass. Sounds like it was a big chunk this time. :-(