I've noticed that more and more of the beadwork I've been doing is in the nature of small things: pendants, beaded beads, earrings, items that can be made singly or perhaps in pairs; no complex seed beaded chains and ropes by and large. I haven't examined it too closely, because it's not as though I've been bereft of any sort of inspiration, and I didn't need to become self-conscious to the point of paralysis. Still though, small things largely.

In passing thoughts skipping beyond merely noticing, I wondered if perhaps I was stressed (at work; my responsibilities have changed in the last six months), and then let it go.

Even though on Friday evening I was well aware that I was at the beginning of a four-day weekend with no immediate deadlines looming, plenty of free time, nothing to stress me, it took three days to achieve a useful state of relaxation, one in which I was comfortable beginning a project which would take more than an hour o so. 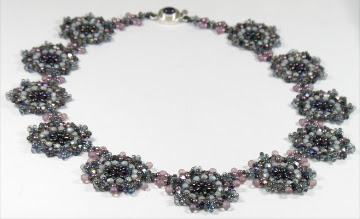 It's still not a seed-beaded lariat using size fifteens, but it did take the better part of the evening and much of the afternoon - and that after finishing the cuff of my earlier post, which also required multiple hours.

I even managed to sleep later this morning than I have in months.

Too bad I have to be at work tomorrow again.