There's this test I really should take, and it requires a small amount of studying and it won't be a huge time-sink, and then I really should be working on the instructions for Tuesday's class, but while I was working on a sample for another class entirely, one not even slightly imminent, I made these teeny little beaded beads which would look quite nice on Peri head-pins, wouldn't they? 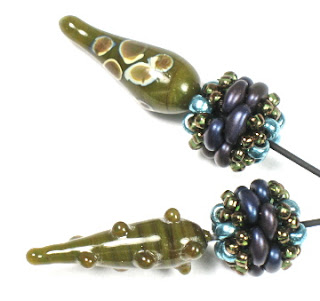 I absolutely had to know of they'd scale up lengthwise (along the axis), and it turns out they do, but only under some circumstances, though it's questionable if they should. The tiniest one pleases me so much more than the other two, though I guess the longest one would do in a pinch.  Do for what? Dunno; under any circumstances in which you absolutely must have a beaded bead just this side of very small. 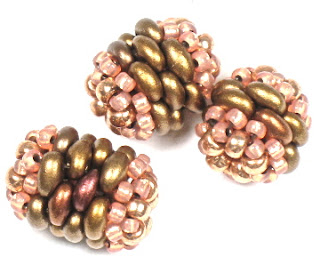 The procrastination for my test (still not taken, though I've done the requisite reading. Really, I'm probably at my best earlier in the day rather than later, I should think) was supposed to be only this bracelet which really looks so much nicer with opaque twin beads than with the iridescent ones I used in the original. 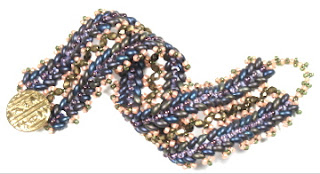 I like that you can see the structure of the thing, the orientation of the beads and so on.

It had to be done.