More Than A Mattress

That's what I told the person who's been supplying me with foam for my upholstery projects when he asked how well I did at the little show at the bead store today. 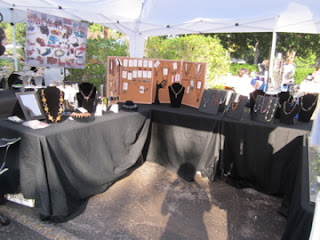 Pictures of booths are always lame, aren't they, especially when you can see the shadow of the photographer. 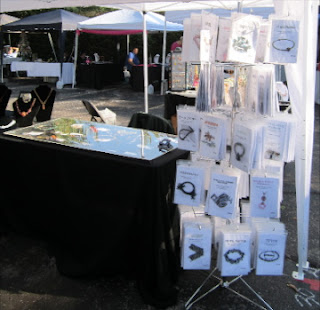 I'm told that people had Display Envy for the spinner stand I used for my kits. Whatever I did last year didn't work at all, and apart from punching holes in the zipper baggies (hole punches are made for paper, not plastic, and they decidedly do not work on plastic. They indent it), it worked really well.

The day didn't start off terribly well while setting up the tent/gazebo: I heard a loud noise and saw that while three out of the four of us were holding the support vertically, the person across from me was holding it horizontally, and had SNAPPED two of the struts. I wasn't thrilled exactly. Not even slightly, actually.

Then when I was holding the broken ends together so that she could tape them, one of the ends of the sharp, torn metal slipped and tore a hole in my finger.

Luckily the puddle of blood (I'm barely exaggerating) was under one of my tables, and I was gauzed and disinfected and taped up pretty quickly. It's ugly, but it doesn't really hurt.

After that, the day went off without a hitch. The weather was gorgeous (unlike the tundra of last year), I sold mostly kits, but a few finished pieces as well, AND I swapped a necklace for some lampwork, so I'm altogether pretty happy, if a little sore and tired.