I had an idea and tried and tried to get it to work, but I think I'm giving up in disgust. Apart from the colour of the seed beads which clash horribly with the marbled fire-polsihed beads, it's a bit messy-looking, so I thought herringbone would look tidier and more substantial. 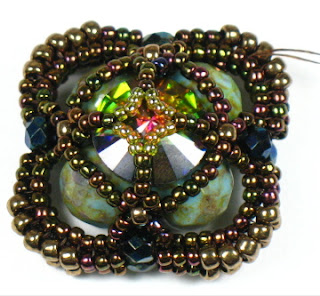 Yeah no sort of, but the whole thing no longer fits and the rivoli wobbles around. The intersection points where the strings of seed beads converge is also messy, with beads fighting for space. And the gap I don't like too much either.

There was one more try which looks a lot like this one, but with more untrimmed threads floating around. 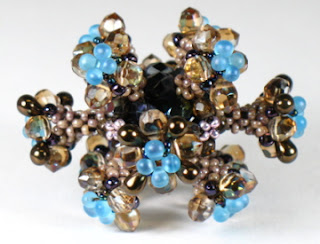 So I made a fancier Cuboctahedral Bouquet, inspired by the students in my class today, and necessitated by reworking the instructions. It's quite large, I must say, since I made some of the spikes longer, and used bigger beds for their decorations.

I don't have a problem with the size, I'm just saying. The diameter across the equator is about two and a quarter inches.