It's actually not a bad bracelet, though not entirely practical since it's not amenable to minute size adjustments in this form (six medallions). Turns out it looks quite nice on the wrist though. I think it'd be sucky as a necklace so whew, luckily it's not. 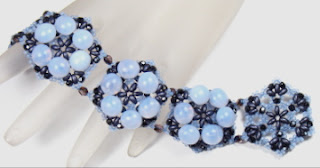 And I made too many of these, but they look so pretty all lined up like this.

I haven't made a huge amount of progress in the home decor department aside from covering two chair pillows.

I look at my sofas with murder in my eyes, scheming their demise and dreaming of replacements, but the most likely scenario is a new slip-cover, though with my general procrastinatory attitude towards sewing projects (I have three pillows, still unmade, promised to a friend for a very big favour. Four years ago. Yes, I'm a bit ashamed, but piping, I hate attaching piping).

In the real world though, the one of the here and now, I should probably get a new dishwasher before I get a new sofa, since the old sofa is perfectly functional and the dishwasher only marginally so.
Posted by Charlene at 8/12/2012 10:32:00 PM