I freely admit, I have some reliable hot buttons.
For instance, I hate a Big Fat Waste of Time.
I don't mean that every second of every day has to be dedicated to my enjoyment (although this is not something I'd refuse if available, let's face it). I also don't mean that all of my free hours (or minutes, as the case may be) have to be fully employed in the Making of Something. Pawing through the Yum Section of the fiber stash (that part lives under my bed for safe-keeping) or deciding which is my absolutely favourite gold seed bead are perfectly valid uses of my time.
What I can't bear is being trapped doing something that is neither beneficial, necessary nor pleasant and not being able to escape.
Like being unable to extricate myself from last night's performance of Stomp (insert universal finger-in-mouth sign for gagging).
The current season's dance subscription has so far at best been mediocre, and at worst (so far), Stomp.
Wikipedia describes them as a dance troupe, but I think that's being generous. Tina Turner's live show had a dance troupe. Those cute boy bands are pretty decent dance troupes. Brittney does a pretty good imitation of a dance troupe.
You get the picture.
Stomp doesn't even come close.
They have one concept: making rhythmic percussive noises by hitting things with other things, none of said things being anything manufactured for their acoustic properties. That's a fine idea, if not unique, and eminently suitable for a ten-minute slot on a late-night or morning talk show, but two hours of it on a stage WITH NO FREAKIN' INTERMISSION was more than I could bear.
At first I was just bored.
For quite some time - at least it felt like a few days, or perhaps even a week. I kept waiting for intermission so that I could leave.
Then the noise started to bother me, especially the mindless and endless "WOO!"s made by audience members, especially the prepubescent boy to my right.
I found it dull and low-brow: the sound ordinary, the so-called comedy trite at best, unfunny more often, and I kept on wondering when the dancing would start. People putting their whole ungraceful bodies into hitting things with feeling is not dance, no matter how hard you squint.
I may have been the only person in the entire theatre who was not hysterically enthralled and enraptured.
As it happens, I did have a small (sock) knitting project in my purse, but it's more complicated than stocking stitch or even two-by-two ribbing and so not well-suited to KITDWB (knitting in the dark while bored).
Now that I'm well and truly past the halfway mark on my own personal time line, I really resent those three lost hours (two sitting there, another getting there and home again). At least I got some knitting done in the ten or so minutes sitting in my seat waiting for it to start.
Today my time was well-spent.
I made a kit sample. 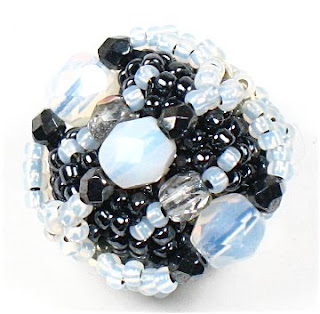 I made a cool right angle weave open cube on a necklace (removable). 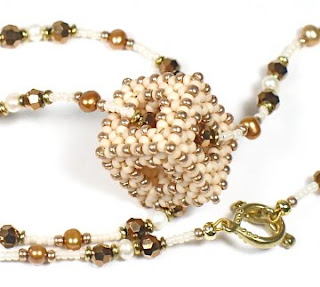 And earrings to match. 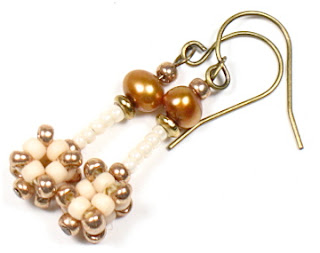 And a pair of earrings to match the pendant I sold two weeks ago. 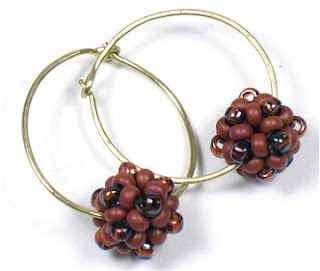 And then I saw Jane Eyre, which I liked far better than I'd thought I would, notably the actress playing Jane, who was remarkably aptly-cast. She's not ugly and has a wonderfully expressive and interesting face, but isn't too pretty, unlike in the previous Jane Eyre I saw. And Mr Rochester was pretty yummy.
Also I think I may be clawing my way out of Knitting Hell. (I've resigned myself to stripes in the context of multi-directional knitting in the interest of not being permanently mired).
Posted by Charlene at 3/26/2011 09:41:00 PM