So I had this idea, and I made sketches with notes, and then I came home and beaded it. 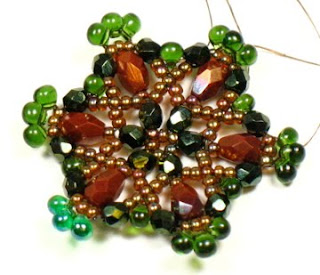 It sort of worked, but not quite, as it ruffles a little (not to mention I ran out of fringe beads on the lower left), so I had to rethink, but I liked the concept. I needed to stretch it out a bit so that the edge beads would have enough space. 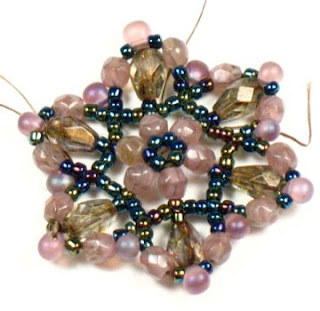 That didn't work either, because what you can't really see in the picture above is that the centre section is raised, and not in a good way, and even though it's not quite as much as the version that I cut up before it, still too much.
The one after this that I cut up too had an extra round of seed beads in the centre and was just horrible.
The next one used small fire-polished beads to move the edge outwards, which still didn't work but it was moving the right way, so I tried again. 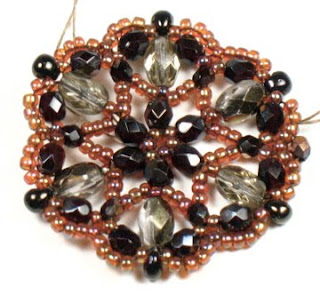 This one lies flat but doesn't lend itself to the trios of fringe beads (or in fact much in the way of fringe beads at all) that I liked in the original, and even with small fire-polished beads nestled in the dips around the edges (like on the right edge), it has an unfinished look, and the seed bead holes are so full that adding anything for extra depth is problematic.
I'm out of ideas and short on sleep, and while I'd love to think I'll get a good night's sleep and wake up with a brilliant solution, the likelihood of that is slim, as my much-too-young kitten is suddenly unexpectedly in heat and loudly yowls for guys in the wee hours, and failing to satisfy that urge (a certainty as there are no other cats in the house; definitely no male cats), cries outside any closed door (and all the bedroom doors are within a couple of feet of each other), neither call being even slightly conducive to sleep.
When she first started making little whiny grunty noises and spasming her hindquarters a couple of days ago, I thought she might have a tummy-ache. When her belly felt perfectly nice and soft and she didn't seem too unhappy and it didn't go away, it occurred to me that she's been particularly affectionate, and then I used The Goggle (hi Denny!) and confirmed that yes, she's a victim of her own biology and is suddenly boy-crazy.
We are so very badly in need of an opening at the vet.
Posted by Charlene at 11/12/2010 11:47:00 PM